Cypress, CA – Veteran rider Tommy Hayden will continue to race for the Yamaha Extended Service/Graves/Yamaha team in AMA Pro GoPro Daytona SportBike. He is scheduled to compete at Miller Motorsports Park in Utah in three weeks, followed by Road America in Wisconsin the weekend after the Miller round. The announcement was made today by Keith McCarty, Motorsports Racing Division Manager for Yamaha. 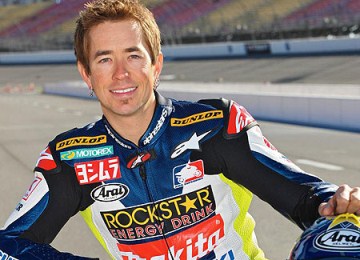 Tommy, who is currently just 12 points out of the lead in the Daytona SportBike season standings, has performed admirably for the team after replacing team rider Garrett Gerloff, who suffered a leg injury in practice for the Daytona 200.

“Tommy’s a very smooth, analytical, and experienced rider,” McCarty said. “We were very confident in his abilities, and we were fortunate that he was able to join our team, especially on such short notice after Garrett had his mishap. Garrett’s really been a trooper through this whole thing, and he’s been a great teammate, as well. While continuing to rehab from his fractured femur, Garrett’s been right there with the team at Road Atlanta and also at Infineon Raceway this past weekend. He’s been meeting the fans, signing posters, and helping out in any way he can. We’re looking forward to seeing him back in the saddle soon but, for now, his #8 Yamaha YZF-R6® is in very capable hands with Tommy.”

At Infineon Raceway, Tommy finished fifth in Saturday’s Race 1, while his teammate Cameron Beaubier was third. Tommy came back strong on Sunday, rode another solid race, and finished second in Race 2. In the five DSB races that have been run thus far in the season, Tommy has been on the podium three times, and he’s never been out of the top seven. Despite riding for the past few years in the SuperBike class, Tommy acclimated very quickly to the R6 and to the Daytona SportBike class.

“I race to win,” Tommy said. “I’ve got a great team to work with, and they feel the same way. They race to win, too. I’m really happy to be able to continue racing for the Y.E.S./Graves/Yamaha team.”

The Yamaha U.S. Road Racing Teams will travel to Tooele, UT, in three weeks for the next AMA Pro Racing round at Miller Motorsports Park on Memorial Day Weekend, May 26-28.